The term midlife crisis was invented in the year 1965 by Elliott Jaques to represent the time adults’ start acknowledging that they have limited time to live and they will die someday (Oliver and Wright 2013: 415). For most people, they experience this type of crisis after realizing that they have already lived more than half of their lives. And at times this crisis can be due to some biological developmental transitions they experience such as andropause, menopause and other factors such as after realizing that they took a wrong career, lack of children or children leaving home, unemployment or stress in their marriage. Normally midlife crisis is characterized by emotional stress for both men and women in a period between 35 and 55 years. For most people, they spend the period in questioning their character, ambition, and lifestyle so that they can fit well in their emotional needs.  However for others, midlife period brings a lot of crisis making them separate their marriage due to search for affection outside marriage. This population starts questioning all their earlier choices in life (Elaine 2000: 90). They question the decision to choose their marriage partner and destroy their families in process of changing their beliefs and character.  The midlife crisis can also be described as a normal stage in maturing process life where many experiences emotional transition. This emotional transition is due to an evaluation of one’s life and readjustment of the remaining part of life. The present study provides causes and descriptions of midlife crisis and compares the crisis in men and women in order to determine the most affected gender by the crisis.

The hypotheses of this study are:

The majority believe that midlife crisis is a transition meant to explain personality changes, change in behavior and life orientation that occur when an individual is between 35 and 55 years old. Some studies have dismissed the occurrence of midlife crisis stating that it is just a phrase that is used to justify behavioral changes that can be controlled by self-discipline. Statistics indicate that about 10 percent of Americans experience the psychological crisis at this age (Elaine 2000: 90).  Midlife crisis behaviors can be increased by other conditions such as the type of personality, and psychological crisis. There is a significant importance for people to separate midlife crisis from the stressor. In most cases, midlife stressors are mistaken as the midlife crisis because the majority are at a stage characterized by a lot of stress that can add up and be confused with a crisis. This is because midlife crisis occurs at an age between 35 and 55 where individuals assess constantly their lifestyle and rectify their earlier mistakes. At this period, most of the people have a lot of family problems such as educating children, medication, and other bills. At middle age, people experience a lot of life events such as career setback, loss of family members and other loved one extending their psychological stress. However, the same stress can come earlier or later in life.

Midlife crisis is real; it is more prevalent in men even though some women experience it through reassessment and orientations. However, he failed to explain the differences between psychological stress and midlife crisis (Oliver and Wright 2013: 409-412). Elaine (2000: 93-98) argues that midlife crisis is a normal developmental stage in someone’s life and should be taken positive since it comes with goals one should achieve in life. He argues that you cannot avoid the midlife crisis provided you live past 35 years. He further explains that midlife crisis is just like adolescence which is meant to transform a child to adulthood and in a similar way, midlife crisis transforms one to maturity. No one can escape or deny experiencing the midlife crisis. A person may fail to enjoy his/her middle life but it helps to guide one positively in achieving financial, psychological and spiritual wholeness. At midlife, a person is almost achieving half of his dreams.

In some individuals, the midlife crisis is unsettling, confusing and life-changing while in others it is beneficial. The confusion in midlife can be in terms of actions they take, their desire and behavior. In a more extreme case, these individuals decide to act on their desires. Basically, the thinking that life is half over is the main factor that leads to midlife crisis. People start realizing the fact that life is not permanent and one day they will die without achieving their personal goals. On realizing this, one starts straggling to achieve the goals within a short time which is more stressing. In addition, one may decide to change personal goals that he/she cherished once and try to achieve within a short period. The person may decide to achieve all his/her losses or aggrieve for what he has not accomplished.  One start thinking more about missed or postponed opportunities and in this stressing period, one changes the way he/she perceived life significantly. One feels that death is closer than expected.

The other main characteristic of midlife crisis is a consistent self-evaluation. For example, if one had the goal of having a good hotel or achieving any other career in life he may re-evaluate and alter the goals at this stage. This is due to one loses his self-identity creating new, uncertain, insufficient and irrelevant or when he/she created the goals the elements used were uncertain and unattainable.

Most people establish new self with new goals of attaining any lost opportunity during their youthful stage. These may involve divorcing their old couples, changing their spending system, disposing their old living in order to start an entirely new life. The changes at midlife are instant, illogical, irrational resulting in hurting their loved ones. The loved one start questioning what is happening to someone at this stage. In life, people undergo two types of the identity crisis, firstly during adolescence and the second during the midlife where an individual surrenders his/her first identity and establish a new identity (Orville and Baltes 2017: 13-15).

People with midlife crisis start having a strong feeling to change and adventure, i.e. one may start going out, buy a sports car or he/she may start drinking and dancing the whole night. This is aimed at recapturing their youthful stages. One may neglect some of the important things for something that he/she has never expressed interest.  One may start feeling depressed affecting moods leading serious negative effects on relationships and career job. One may neglect friends, family, and work. One starts feeling hopelessness, Sadness, pessimism, helplessness, Lack of energy, have Unusual, sleep patterns, Unusual appetite or weight loss Some people start blaming their spouse with a lot of anger, most of the individuals do not analyze their mistakes or any situation they find themselves in.

Secondary published data was used. The data assessing life events during the middle life, midlife crisis and age group analysis through questioners. The data generated on midlife crisis was tabulated and analysed depending on age groups and with the perceived crisis period (between 35 to 55 years).

Table I. Causes of the midlife crisis.

From the table, it is clear that most people associate life transitions to midlife crisis and not looming death. Most people reflect the crisis with the belief of what may happen later in life.  Thinking of things that do not exist maybe through imaginations also may lead to the crisis significantly but more in women than men (Elaine 2000: 97).

According to Figure 1 below more men are affected by the midlife crisis than women. The median age of the midlife crisis is 46 years and can last for 3 to 10 years for men and 2 to 5 years for women. This means that men are highly affected than women. The main symptom of the crisis is the tendency of reassessing and questioning their priorities and trying to readjust their lifestyle so that they can meet their emotional demands. Most people always question their choices leading to a feeling of searching a goal which is not well defined. 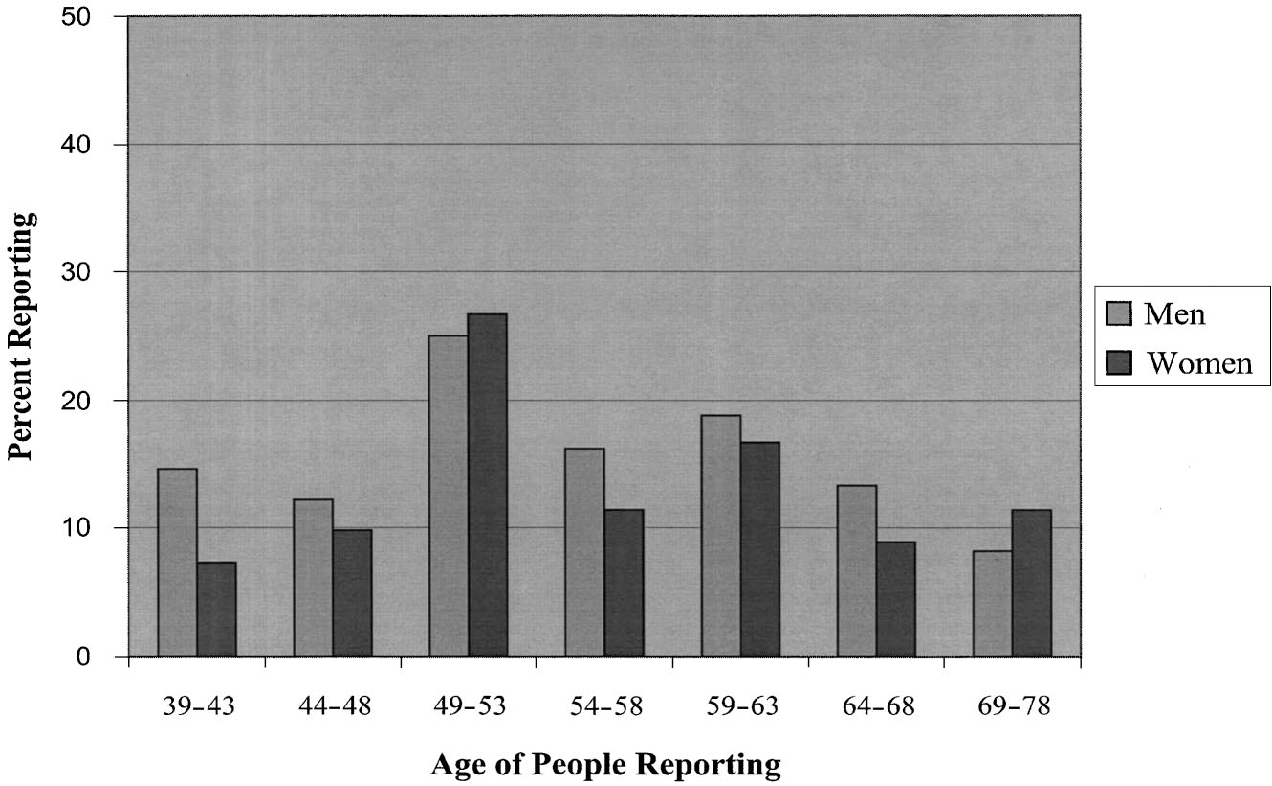 Fig. 1. Distribution of midlife crisis between male and female and age at crisis.

In addition to these, some people may exhibit some aggressiveness, abuse drugs, increase some wrongdoings, spend on costly items, create some friendships with young people, increase attention to their appearance or emphasize on the excellence of their children.

According to Figure 1 above more men are affected by the midlife crisis than women. The median age of the midlife crisis is 46 years and can last for 3 to 10 years for men and 2 to 5 years for women. This means that men are highly affected than women. The main symptom of the crisis is the tendency of reassessing and questioning their priorities and trying to readjust their lifestyle so that they can meet their emotional demands. Most people always question their choices leading to a feeling of searching a goal which is not well defined. In addition to these, some people may exhibit some aggressiveness, abuse drugs, increase some wrongdoings, spend on costly items, create some friendships with young people, increase attention to their appearance or emphasize on the excellence of their children. The depression may be due to changes in mood, and negative effects on relationships.

Other factors that can lead to midlife crisis significantly are life review or re-evaluation, and change in personal approach to life. The midlife crisis affects both men and women although differently. Studies suggest that causes of the midlife crisis in men and women are different. Midlife crisis in men is work-related issues while in women are due to self-assessment and evaluation in their gender roles.  Most men undergo the crisis on a realization that they are getting old, start getting afraid of illness, or becoming less attractive to women or failing to achieve the set goals. On the other hand, some women experience the midlife crisis after realizing that all their children have grown and they have another opportunity to do what they postponed due to motherhood.  In addition, some women may undergo the crisis because of the feeling that they have worked hard and achieved a lot economically so she must start experiencing all happy moments she had postponed.   At menopause, women undergo some biological and physiological changes which may result in a lot of re-evaluation and adjustments in life. Women experience more opportunities during the midlife crisis than men creating a lot of changes in their lives (Orville and Baltes 2017: 13). Women are able to handle the midlife crisis better than men because they perceive it as a transition to a better life. In general, the midlife crisis for women is mostly for reassessment and transition while in men points at regrets for unachieved goals. Women tend to reinvent themselves during this period while men submit to the negative effects of the midlife crisis (Oliver and Wright 2013: 407-411).

From the study, it is clear that midlife crisis has both negative and positive impacts on individuals. Most women, for instance, are positively affected and it serves as a transitional period where they achieve most of their goals. While in most men, it can lead to some negative behavioral changes. The idea that midlife crisis is expected and cannot be avoided can encourage those who are affected negatively to seek help.