Post-Impressionism emerged from the efforts of a few independent artists during the latter half of the 19th century. This informal movement was an expression of rebellion against the shortcoming of impressionism. These artists crafted an array of personal styles that emphasized emotional, symbolic, spiritual and structural factors, which they perceived to be lacking in impressionism. With respect to the canon of modern art, Impressionism constituted the first movement. Akin to the majority of the revolutionary styles, this became a part of the mainstream and its limitations caused exasperations to the subsequent generation. The foundations of 20th century art were laid by Vincent van Gogh and other noted artists, who expanded the limits of the Impressionism style. The term Post-Impressionism emerged from the title of the “Manet and the Post – Impressionists” exhibition. This momentous event had been organized by Roger Fry in London, during the winter of 1910-1911 (Artyfactory).

The Post–Impressionism era belonged to the lone painter, and very few of these painters would come together. In the year 1891, the redoubtable Impressionist, John Rewald had declared that there was no longer a distinct school, and that the few groups in existence were given to being disbanded frequently. The Post-Impressionist painters had diverse opinions about art, nature and painting style. The sole common factor was the influence of Impressionism upon them. These artists experienced the very same tragic consequence, namely that of having no possibility of foraying into the Salon and displaying their work to the public (Brodskaya 17).

The Impressionists had indicated a possible means to these artists, which was the hosting of their own art exhibitions. These Post–Impressionist artists differed significantly from each other. Thus, some of them were devoid of the required level of professionalism; while some of them shocked the public with their bold style, negligence or intensity of colors. In the year 1884, Paris witnessed the opening of a new exhibition, namely the “Le Salon des artistes independents”. This novel Salon provided a solution to everyone, as it did not have a jury and as no one selected works that were to be exhibited (Brodskaya 17).

This enabled artists to display their works without any reservations or limitations. However, there was a restriction regarding the number of works being shown, and this was subject to change every year. Seurat, the famous Neo–Impressionist, had adopted a stance that had rendered him undesirable for official exhibitions. This great artist adopted a proactive role in organizing the Salon des Indépendents. The Independents portrayed material that emerged as the primary attainment of the Post–Impressionism epoch. These exhibitions enabled painters to display their work to a wide audience (Brodskaya 17).

In addition, the paintings of Post-Impressionism emerged as a reaction to Impressionism. These works persisted with the bright impressionist palette. However, they discarded the emphasis of Impressionism upon the spontaneous recording of color and light. The Post-Impressionists endeavored to manufacture art that was distinguished by a higher level of formal order and structure. For instance, van Gogh’s brushwork and the divisionist technique of Seurat resulted in several abstract styled that exerted a tremendous influence upon the development of modernist painting of the 20th century (Academics). 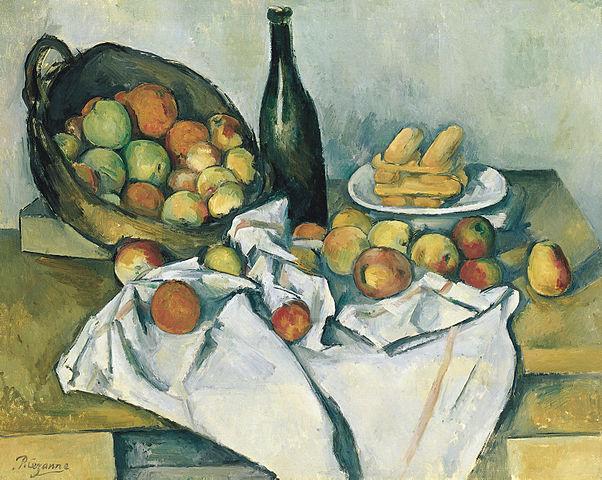 The above work, “Basket of Apples” by Paul Cézanne, is of 1895 vintage. It is an oil on canvas and is an instance of Post-Impressionistic art. It portrays a warped perspective, as is evident from the contrast between the tilt in the bottle and the flat tabletop. Moreover, the back and front edges of the table are not aligned with the left side edge of the table (Smithsonian Associates).

The majority of the Post-Impressionist paintings originated in France. This term had been coined by the English art critic Roger Fry to describe the works of a class of painters, including Paul Cézanne, Georges Seurat, Paul Gauguin, Vincent van Gogh, and Henri de Toulouse-Lautrec. These painters, with the exception of Vincent van Gogh, were French, and most of them had commenced their vocation as Impressionists (Editors of Encyclopædia Britannica). Subsequently, these artists abandoned Impressionism and developed their own individual personal art.

Moreover, the basis of Impressionism was the objective depiction of nature via fleeting impressions of light and color. This was anathema to the Post-Impressionists, who adopted a wider expression, albeit acknowledging their adoption of the vivid and radiant colors of Impressionism; its independence from traditional material; and its technique of describing form through short brushstrokes of broken color. The work of these painters, resulted in the development of a number of contemporary trends for early 20th century Modernism (Editors of Encyclopædia Britannica). 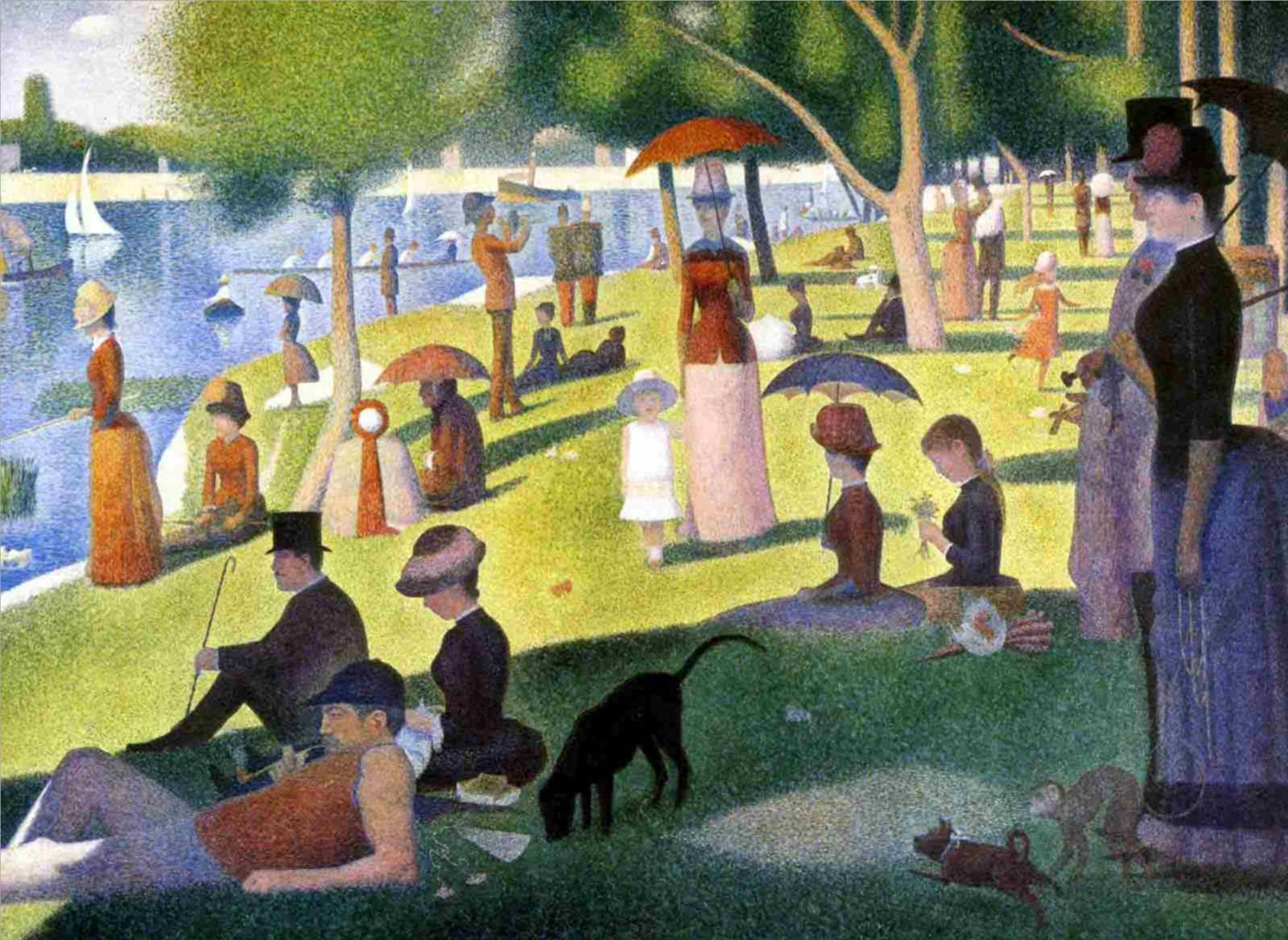 The above painting, “Un dimanche après-midi à l’Ile de la Grande Jatte (Sunday Afternoon on the Island of La Grande Jatte)”, had been painted by Georges Seurat in 1886. This striking example of Post-Impressionism is a gigantic seven by 10-foot masterpiece, and it has been placed on display at Chicago’s Art Institute. This painting constitutes the finest instance of Pointillism in the world. Seurat had displayed the play of light, by resorting to minute and point-like brushstrokes with contrasting colors. As such, Seurat had created several huge works that employed miniscule, pixel-like strokes of pure color, which are not perceived at the normal viewing distance (Norfleet, Phil). Due to this technique, Seurat’s works depicted tremendous radiance.

The major Impressionists resided in Paris, and their works was during the period 1860 to 1900. They included, Frédéric Bazille, Edgar Degas, Claude Monet, Berthe Morisot, Camille Pissarro, Auguste Renoir, Alfred Sisley and Mary Cassatt. These great artists enjoyed international following and were responsible for having revolutionized occidental notions regarding painting. On the other hand, the Post-Impressionists were partial to symbolic content, formal order and structure, whilst rejecting emphasis upon spontaneous and naturalistic rendering of color and light. The area of agreement between the Impressionists and Post-Impressionists was that of the artificiality of the picture. Moreover, the Post-Impressionists were convinced that color could be independent of composition and form as an aesthetic and emotional conveyor of meaning. These artists have produced some of the greatest works of all time, including Monet’s “Waterlilies”, “Series of Waterscapes” and van Gogh’s “Starry Night” (Oxford Art Online). 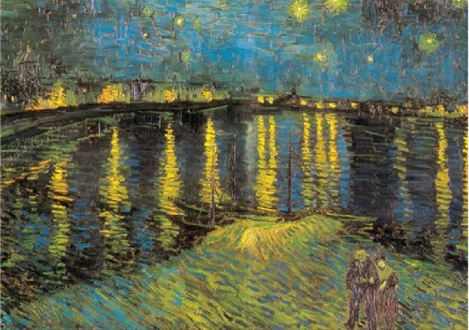 Depicted above is Vincent van Gogh’s “Starry Night”. This famous painting of 1888, is an oil on canvas and is on display at the Musée d’Orsay at Paris.

Thus, Post-Impressionism was born during an era marked by monumental and unprecedented change. Technology was producing the near-miraculous, and science showed development in multifarious and unorthodox channels. In addition, collaboration between the various branches of science began to take place. This resulted in discoveries that were deemed impossible a mere score of years before. This development produced a dramatic transformation regarding the perception of humanity and the world. An instance of this was “The Descent of Man, and Selection in Relation to Sex” by Charles Darwin. This thought provoking work had been published in 1871 (Brodskaya vii).

The Impressionist and Post–Impressionist movements were highly influential art movements of 19th century France. The Impressionists discarded the state-controlled academies and Salons and adopted independent exhibitions. The first of these exhibitions were conducted in the year 1874. These artists painted landscapes and scenes of life of the modern epoch, especially of the leisure and recreation of the middle-class. This was a marked departure from the erstwhile emphasis upon the mythological and historical narrative. The Impressionists focused upon the fleeting effect of atmosphere, light and movement. They carried forward the rejection undertaken by the Realists from the Illusionist tradition. This was achieved by emphasizing paint on the surface of the work, flattening the sense of perspective via absence of tonal modeling, and employing bold and trimmed perspectives. These artists confronted modern city life and nature directly. They were distinguished from their antecedents as they painted in the open air and their palette was one of pure colors (Oxford Art Online).

As such, comprehension of the intricacy of the art scenario, at the end of the 19th century, can be achieved via the term Post-Impressionism. This complicated network of exchange, camaraderie and rivalry generated Symbolism, Pointillism and Synthetism. In addition to the acknowledged masterpieces of van Gogh and Gauguin, there were several groups and individuals who produced outstanding works of art. These included, the Nabis, School of Pont-Aven, Henri de Toulouse-Lautrec and Henri Rosseau (Ward 14). Their works can be patently regarded as the basis of 20th century modern art.

Some of the major movements of art history are Impressionism and Post-Impressionism. These constitute outstanding art innovations that have transformed the manner in which artists exploit their materials and art’s reputation. Despite having certain common factors, the Impressionist and Post-Impressionist movements diverge in technique and purpose. The emphasis of the Post-Impressionist compositions was upon the person experience of the artist as opposed to the object. The latter had been the focus of impressionism, which regarded the style of the work, viewing a piece of art from different angles and developing a novel method of applying paint, as being more significant than the subject matter of the work of art. According to the above discussion, it can be surmised that Post-Impressionism was a major revolution in art, which emphasized its innovation and transformation.