The problem of unemployment has become a central economic development question in most countries. Whereas many economies have introduced measures to reduce the unemployment challenge, there has been an insignificant success as more people lose their jobs daily. The youth are the worst hit group by the problem (Bradley, 2005). As a result, there have been calls by various economic advancement policy groups for the government, through its agencies to look into the issue of unemployment. Hungary is one of the countries that experience the highest levels of unemployment among the youth. Other countries are those mostly in Africa and the Middle East. This paper discusses how the challenge of youth unemployment has hindered economic growth in Hungary.

A population that has a high number of unemployed people has a limited strength to excel because of slow economic growth and development. For instance, the Hungarian economy has failed to catch up with others such as that of the United States and China because of a large percentage of unemployed youth (Vaughan-Whitehead, 2011). Economic analysts have recommended that it is necessary for the problem to be solved if the overall economy of the country is to heal. The issue of unemployment can be traced back to the last decade of the twentieth century. With necessary interventions, unemployment rates dropped significantly between 1995 to the beginning of the twenty-first century (Blokker & Dallago, 2008). However, the country reverted to the initial situation with high unemployment rates between the years 2003 and 2011. The decade-long challenge has caused a lot of problems across sectors in the country, which has caused panic among government agencies on the possibility of the youth to have confidence in the efforts by the government to handle the problem. 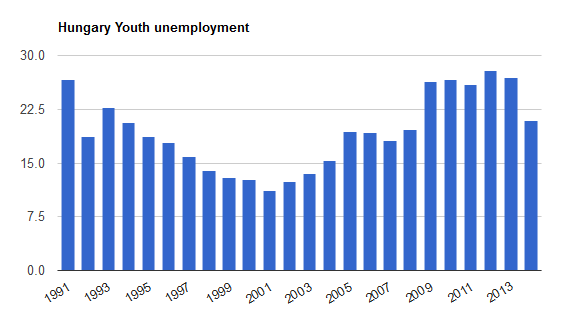 Graph showing unemployment rates between 1991 and 2013. Source: The Global Economy

Statistics indicate that despite the increased uproar in the state of the economy, the efforts put in place by various organizations to improve the economy are paying off. For instance, there has been a remarkable drop in the rate of unemployment among the youth in the country since 2013. Towards the end of 2016, the rate had reduced to 12.5 percent from 25 percent in the year 2013 (YCharts, n.d). The results are an indication that there is a possibility to improve the general health of the Hungarian economy. Statistics also indicate that the ratio of youth employment by age and gender shows that both male and female are affected by the problem. Besides, individuals between the age of 20 and 29 are the most affected by this issue.

Various incentives have been introduced for the youth in the European Union that affect the Hungarian population. For instance, there are opportunities for people between the age of 18 and 24. Individuals in this category can work as student workers. In exceptional cases, such as the disadvantaged groups, the individuals can be given scholarships that can help them improve their lives. However, even with the availability of such opportunities, it is still evident that the population struggles with the unemployment problem (Stalcup, 2005).

It is clear that in as much as the Hungarian economy is not worse like that of several other countries, unemployment remains a pain to its growth potential. With appropriate solutions to the issue, the country will be one of the most robust economies in the world such as Russia, China and the United States (Vaughan-Whitehead, 2011). The fluctuating levels of unemployment are an indicator that there are variables that can be controlled to achieve the desired economic targets. It is advisable for the government to identify and handle the factors being the problem and facilitate the economic growth (Meusburger & Jöns, 2001).

Throughout the learning process, I have acknowledged the fact that unemployment is one of the leading problems that the youth face. Unemployment is not only an economic challenge but also a social issue. For instance, the young people with little to do so as to better their lives economically are subject to social influence to engage in alternative practices to sustain themselves (Lang, 2011). For instance, cases of drug trafficking are on the rise worldwide. Besides, there have been trends whereby the levels of dependency have gone rocket high. In fact, large populations of non-disabled people with the necessary skills that can place them in the job market depend on a few working individuals. I have also realized that the unemployment problem is created and can, therefore, be solved. One of the reasons that have contributed to the issue of unemployment among the youth is corruption. The practice has led to economic uncertainty in most countries, where marginalization and massive loss of resources that could be used to create jobs are lost. Besides, there is a lack of proper political will by the various institutions to come up with stringent strategies that could help reduce the challenge of unemployment. In fact, with appropriate policies by the government and related agencies, it is possible to empower the youth and create opportunities which they can utilize to create jobs for themselves (Hann, 1990). There is also a need for an employment system cleanup that will ensure that jobs are given to the people who deserve them. As a result, the youth will be motivated to seek opportunities that will make them dependable members in the society. It is also important for the youth to become aggressive when seeking employment, as laziness is one of the issues that have contributed to their inability to secure employment. The Hungarian youth should hope for the best since statistics show that the economic health is improving. Reliable indicators show that unemployment has also been reducing since 2013. However, the economic agencies in Hungary should avoid previous mistakes and introduce policies that will sustain the positive economic progress.