Lions Mane Jelly Fish is known by a scientific name as Cyanea capillata.  It is called Lion’s mane because it has hundreds of tentacles which resembles lions mane. It has bell-like shape with shape with tentacles hanging from it (Lenihan 1).  Lion mane jellyfish belongs to the kingdom Animalia, phylum cnidarian, class scyphozoan, order semaeostomeae, family cyaneidae and genus cyanae. 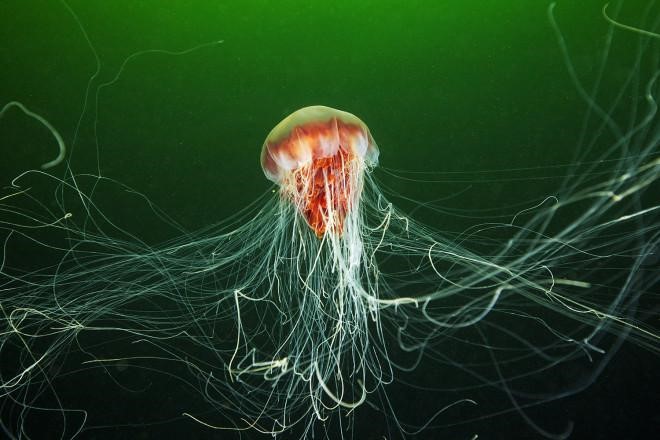 The species is the largest in the in a family of jellyfish. The fish has a lifespan of approximately one year. The species commonly refers and thrive in colder environments of Northern Pacific oceans, Arctic and northern Atlantic. The stinging tentacles of the lion’s mane jellyfish are used for capturing, pulling and eating prey such as smaller jellyfish, fish and sea creatures (Lenihan 1).  The colorful jellyfish have very poisonous stings although the cases of human fatalities are rarely recorded.

The lion mane jellyfish provides food and shelter to juvenile prowfish, shrimp, butterfish, and meddusafish. The predator for the fish includes sea turtles, ocean sunfish, and seabirds (Horton 1). The fish stays near the surface of the water and no more than a depth of 20 meters and traveling through ocean currents. The fish does not entirely depend on the currents for movements, but sometimes it uses pulsation from the bell structure. The lifecycle of the fish follows four stages of larvae, polyp, ephyrae and Medusa (Lenihan 1). In the medusa stage, it can produce sexually while in the polyp stage it produces asexually. The fertilized eggs are kept in the tentacles by the female, and when they hatch to larva, they are placed on hard surfaces where develop to other stages.