The sculpture of Thésée combatant le Minotaure by Antoine-Louis BARYE shows a representation of a human being attempting to fight off a beast, in the form of a man. The man on the left brandishes a sharp knife, pointing it directly at the beast or monster, with sheer energy and force as displayed by his flexed biceps muscles. The knife is pointed directly to the head of the beast, which can be explained as a sure death situation as if the knife lodges into the skull of the beast, it is anticipated to die on an instant. The beast’s head has short and sharp horns, which indicate that it is also a monster that can easily finish off the man wielding a knife. The tail on the beast’s back develops the false impression even further. The beast appears even stronger than the man as its muscles look bolder and pronounced. However, it is forced almost to the ground, lower than the man, which proves the unseen power of the man wielding the knife. As well, the beast seems to have lost its footing, which implies that it may lead to a fall that may mark the end of it. However, looking closely, it is possible to see that the beast has engrossed its left leg around the man’s legs, which appears like a strategy to bring the man down and overpower him completely.

Below them appears something like rocks, which can be used to explain the settings that the two are in, mainly a mountain or rocky ground, such as a battlefield, where many wars are fought. These rocks could have been the reason also for the lost balance of the beast, while at the same time, they may be perceived as elements in a terrain that the man with the knife understands well. Also, the beast has placed a tight grip on the man’s shoulder with its left front limb, which seems strong and rather painful to the man. The legs of the beast are manly, which creates an illusion of a true man or beast to a viewer. Equally, the man with a brandished knife appears to be wearing a headscarf that seems feminine. However, were it not for the prominent muscles and sheer power and control of the beast, the man would be signed off as a woman fighting off a beast.

The sculpture can be used to explain the true nature of man whenever he gets an opportunity, be evil. The sculpture shows how a man can turn against another when wronged or oppressed. Man can take advantage of a situation to overpower their friends, neighbors or even family at any given time if they are not controlled by tough laws or rules. The beast represents the evil actions of man, while the muscle power shows the extent that man can go to ensure that his actions are evil and devastating. Man can take advantage of his settings to injure others, such as the use of the harsh terrain or weapons, as seen in the modern day evil actions of man, such as terrorists targeting shopping malls where many people converge or even transport means, such as trains. As well, man uses weapons of mass destruction, and goes to the extent of integrating bio-weapons, which have adverse consequences to man.

Cameron, in an article that reviews Jean-Jacques Rousseau and the philosophy of man and his behaviors, gives the exact opposite of the meaning of the sculpture. Cameron denotes that man is good by nature, but man is only corrupted by the immediate society to do evil. She continues to state that man, when left to his normal and uncontrolled self, he may never commit any sin or evil doings, but remain good forever. Her argument is foreshadowed even further by Stump in an essay “The problem of evil.” Stump claims that evil is in the world and on this account, man cannot be judged independently without focusing on the fact that the world harbors evil but not man. Stump continues to state that evil cannot be blamed entirely on God as well. However, this argument sounds like a mere scapegoat that its sole aim is to digress the mind of the reader from connecting evil to man. However, Stump, in another essay on “The mirror of evil,” makes a direct connection of man with evil. Stump describes the evil nature of human beings as a reflection in the mirror. Stump puts forward some examples of occurrences that help prove that man is evil and acts as the mirror of evil all the time, which means the evil nature of man cannot be compared to anything else except man himself. Some people can do evil and still stare at the results of their actions right in front of them while others turn their faces immediately away after doing evil (Stump 236).

Cameron claims that the forces surrounding man impel him to engage in unwarranted behaviors, which may lead to the loss of life. Cameron seems to contradict herself, when she states that man is born weak and vulnerable, which in her reasoning, she implies that man’s weaknesses lure him into temptations, where he commits evil actions. Conversely, it is possible to argue that such weaknesses of man since birth are the reason he must not be allowed to dwell without the integration of rules and regulations. The law helps man remain on track and avoid running into trouble. And when he lands into trouble, he may be forced to pay a hefty fine or serve a jail term as a reminder of never to repeat their mistakes in the future. According to Rousseau as cited in Cameron, man can mutilate his friends, be it, his animal friends, such as horses, dogs or even slaves. Cameron indicates that consciousness and being enlightened helps man avoid falling into trouble, which is a classical basis for the adoption of laws as a means to reinforce the consequences of the evilness of man, further preventing him from engaging in evil deeds in the future.

The essay by Cohen does not fall short of indicating that man is a monster. Cohen claims that real people can turn out to be monsters as well (Cohen 4). It is clear that human beings adopt monstrous behaviors when exposed to issues of anxiety, fear or even anger. In this state, man becomes evil and carries out evil activities. As long as man is evil and monstrous, he will never stop doing evil. Cohen describes the monster as a being that will only vanish when defeated and reappear in another being and setting (Cohen 5), which shows, man is evil by nature and, cannot be left without restrictions, such as the law. Man must be controlled for him to be good and not evil. Man must be kept in a constant reminder of the consequences of his actions even when he vanishes and reappear elsewhere with the same evil motives. On the other hand, Cohen claims that monsters go against the law of nature, which can be used to set apart man from monsters. However, this reasoning can still be used for the debate of man as an evil being, especially when stating that man is evil because he is swift to become monstrous.

The argument of a man using evil to fend off evil is evident in the sculpture. Mainly, the man can be seen struggling in a tag of war with the monster, which in this case seem struggling to outdo the man. In the sculpture, it is evident that man attempts to fight off evil by the use of a knife, which is ironical. However, from the point of the monster as an evil man, it is clear that the man with a knife may represent the tough law that intends to control the evil hands of the monster, which represents the evil man. If this is the case, then the force of retaliation to the evil one is questionable and needs further debate. Mainly, this argument shares the same reasoning with, who claims that man is evil by virtue of circumstances or rather the immediate settings/society, which influences him to do evil. In this regard, the society and the law-makers need to understand this when creating punishments for them. As well, Cohen claims that the evil one or the monster will always disappear and hide away when defeated. However, it is possible to question what should be done in situations when the evil man causes atrocious actions.

In an article published in the New York Times Magazine, Tannen claims that men look at women based on how they will be pleased by their dress code as well as makeup. Men view women, who do not apply makeup or wear trendy outfits as hostile and working hard towards distancing themselves from men. Such an argument portrays the views that men have of women, and furthermore, it opens the chapter of how men can be evil by the extent that they perceive the superficial representation of women based only on attracting men. If a woman is not attractive enough to a man, then she is unfriendly and even bad.

Indeed man is evil by nature and must be controlled by rules. If not, he has a high propensity for committing evil. From the picture of the sculpture, it is apparent that man cannot live in a society peacefully without committing evil, such as crimes and atrocities, which go to the extent of killing his neighbor. It explains the modern-day problems evident in the entire world, where a man, despite the right rules and laws of the land, continues to kill, maim family and friends. In such cases, many countries continue to formulate tough laws and even contracting many more prisons, with the aim of preventing future evil occurrences. As well, such countries work hand in hand with other developed nations and seek their interventions when a man turns completely evil, case in point in terrorist’s attacks. What should be studied even further is the subject of a man using evil to justify the end of evil. But as far as man is socially endowed and liberated, he will remain evil, and by any chance, he is willing to commit a crime, based on hatred, jealousy or even based on the most flimsy reasons. 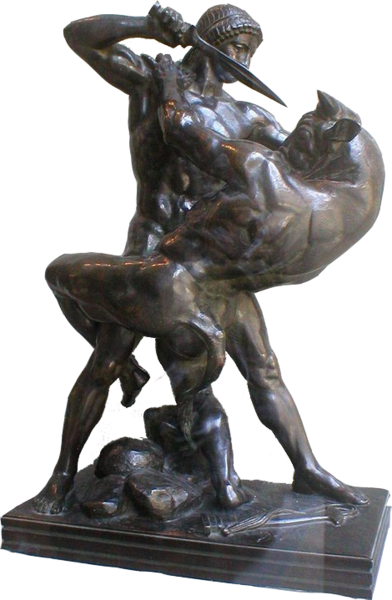