How poverty affects education of children

The wish of every parent is to be able to provide for their children, help them get a good education, and help them realize their professional goals. However, this is not always a dream come true due to poverty which bars them from providing the best for their children. Research has shown that poverty has a significant impact on a child’s educational outcome mostly when they are in their earlier stage in life. In the United States, poverty greatly affects children readiness for school and the child’s ability to benefit from teachings in school (Duncan, 1998). This is contributed by a number of factors that include and not limited to low self-esteem, lack of proper diet, and psychological disturbances. The intent of this paper is to outline how poverty affects children ability to benefit from education and poverty alleviation strategies that have been put in place tackle the problem.

The United Nations in 2000 developed eight Millennium goals achievable by 2015. One of the goals was to eradicate extreme poverty as a way of achieving universal primary education. The summit noted that poverty limits attainment of education which the primary way of escaping from poverty. To effectively understand the problem at hand, there is need to, first of all, define what poverty is. There are controversies in defining poverty as researchers are stuck on whether to define poverty as an economic factor of a social disadvantage in a broader perspective. However, the majority of the researcher congers that poverty has to do with health deficiency, lack of material procession, and lack of social identity. In most countries, poverty is not a persistent condition but a dynamic process within one’s lifetime. For instance, research conducted in Uganda, India, and Peru demonstrated that a third of the people who are poor today were not necessarily born poor but have drifted to poverty due to many reasons and vice versa. All in all, poverty have been found to have a more significant impact on childhood development and educational outcome. Education outcome refers to children’s readiness for school, drop-out, content retention, and completion.

Relevance of the Topic and Connection with Maslow’s Theory

Maslow’s hierarchy theory of needs is an important tool that can be used to advance how poverty can affect children education. Maslow’s hierarchy of needs theory basic needs is what one would strive to achieve before other needs in life. Basic needs are those requirements that one cannot live without such as food, clothing, and shelter. Therefore, it is a basic understanding that someone who is struggling to get their basic needs may not be able to solve problems with childhood education. According to Maslow, human needs hierarchically follow each other as; physiological needs, safety, love/belonging, esteem, and self-actualization. The figure below shows those needs as they appear in Maslow’s hierarchy diagram: 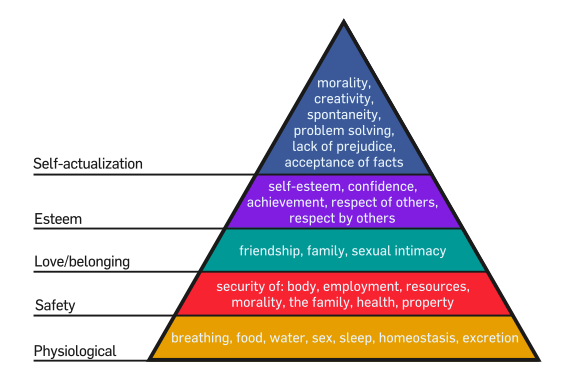 The Causes and Possible Solution for Poverty of Children

Poverty exposes children to social problems, health problems, and affect their general wellbeing. These factors are a prerequisite to children’s educational nonperformance. Additionally, children raised by families living below the poverty threshold have been found to experience learning disabilities and growth delays (Brooks-Gunn, 1997). In most cases, poor parents are less educated or single parents and thus children growing from these families lack proper supervision and thus perform poorly in school. The general understanding is that children form an important segment of the nation and holds the future of the country. Therefore, there are calls to collective responsibility in ensuring poverty alleviation programs are put in place to give children from poor families equal opportunities and prepare them to take future leadership roles (Eamon, 2001).

The country has come up with various poverty alleviation strategies in the form of policies and support programs. Some of the intervention that has already been put in place are income supplementation and residential relocation programs. The family relocation program involves giving vouchers to low-income families to relocate high-poverty regions to low-poverty regions. Research shows that this program improved education performance for boys but had no effect on girls’ performance (Engle, 2008). This was attributed to disruption, and lack of incentives to change the families’ economic status.

Another method that has been used in the U.S. to boost education performance in low-income families is improving school readiness. This program involves taking children from poor families and providing them with comprehensive education program from kindergarten to third grade. This intervention has been found to be highly successful as the majority of children from this programs are able to graduate from high school and enroll in colleges. Positive results have been found in other state-sponsored programs to ensure children from low-income families have access to good education.

Macro Scale Level of the Problem

The poverty case presented in this paper is macro as it affects the entire community at large. Therefore, the problem need be solved in a global context where large scale intervention programs can be implemented to affect a whole state or country.

Similar intervention concept can be applied in Florida as people are suffering from the same social problem and might need similar interventions. Research has shown that the number of children living in poverty in Florida has risen from 18% to 24% despite increased job opportunities for the locals (Santich, 2015). Therefore, the state also need intervention programs to ensure the problem is curbed before the figures grow.