The Indian Ocean Tsunami occurred on December 26, 2004. It is believed that it had the power or energy of 23,000 Hiroshima-type atomic bombs. The magnitude of this massive natural disaster was 9.0 in the Richter scale and its epicenter was located in the Indian Ocean near the west coast of Sumatra (Dosomething.org, n.d.). This natural disaster resulted in the killing of 227,898 people and it caused the loss of around $10 billion (CNN, 2017). People of around 14 countries were affected by this disaster. Indonesia was the worst affected country, followed by Sri Lanka, India, and Thailand. The earthquake that triggered the tsunami was the third largest recorded earthquake in the history and lasted for around 10 minutes. The earth as a whole vibrated because of this severe earthquake (Walton, 2005). This paper briefly explains the causes, impacts, and the evaluation of the 2004 Indian Ocean Tsunami.

As mentioned earlier, the exact reason for the Indian Ocean tsunami was an earthquake occurred in the west coast of Sumatra. At the same time, the real culprit in this natural disaster was the climate change problem. Many studies in the past have proved that earthquake can be triggered by changes in the climate or global warming. For example, a research study conducted by Chi-Ching Liu of the Institute of Earth Sciences at Taipei’s Academia Sinica in 2009 clearly established the direct relationship between climate changes and earthquakes. They have provided convincing evidences to prove the linkage between typhoons barreling across Taiwan and the timing of small earthquakes beneath the island (McGuire, 2016). It should be noted that the relationship between global warming and hurricanes was well established in the past. The study by Chi-Ching Liu provides clear evidence to the connection between hurricanes and earthquakes. In short, global warming can trigger hurricanes, hurricanes can cause earthquakes and earthquakes can trigger tsunami if it happens near the coastal areas or inside the ocean. Therefore, it is logical to argue that the Indian Ocean tsunami was triggered by climate change problems.

The destruction of human life is the major social impact of the 2004 Indian Ocean tsunami. As mentioned earlier, thousands of people lost their lives and a lot of people injured because of this disaster. Many of the people living in the coastal areas lost their home because of the high tides which were raised up several meters in height.

A lot of towns and villages near the striking zones were destroyed because of this disaster. The destruction of assets including buildings, and infrastructure facilities are some of the other economic impacts of this tsunami. The following illustration provides an idea of how this tsunami-affected some of the victim countries economically. 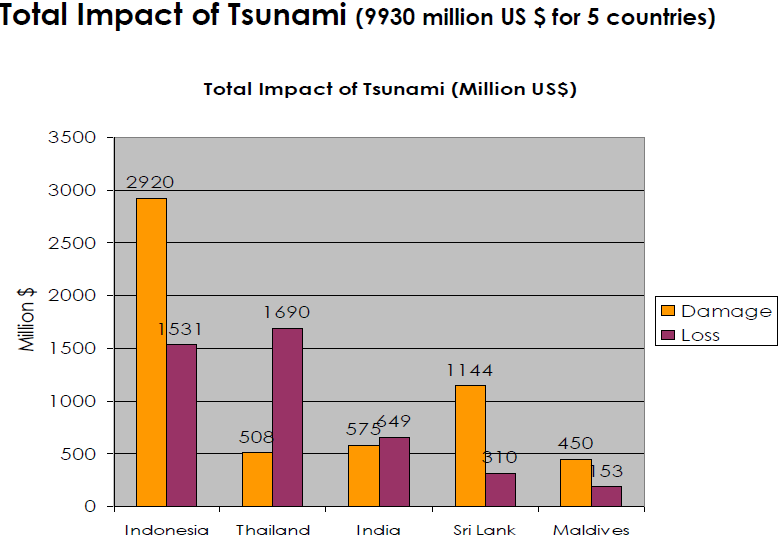 It is evident from the above illustration that the loss suffered by countries alone worth around 9930 million US dollars.

According to Srinivas (2015), waste accumulation in the ocean and contamination of the soil and water are the major environmental problems caused by this tsunami. It is possible that the hazardous materials and toxic substances such as asbestos, oil fuel, and other industrial raw materials and chemicals may mix up because of the tsunami. Freshwater sources such as rivers, wells, and lakes were contaminated because of this natural disaster (Srinivas, 2015).

It is difficult to prevent all natural disasters. But it is possible to prevent some of the natural disasters including tsunami up to certain extent. Global warming is believed to be a manmade disaster. In other words, injudicious human activities are the major cause of global warming even though there are different opinions on this topic. Heavy industrialization and increased automobile use are some of the human activities that contribute to global warming. All these activities result in the liberation of greenhouse gases and these GHGs have the ability to accumulate heat radiations from the sun in earth’s atmosphere. Once the atmospheric temperature starts to increase, a lot of weather calamities including hurricanes, floods, and sea level rise will occur. All these calamities have the potential to trigger a tsunami. Therefore, it can be concluded that Indian Ocean tsunami was a manmade disaster.

A lot of activities are currently going on to empower people regarding the problems caused by global warming. There are some regulatory measures in place for the operations of industrial units. Moreover, the GHG liberations from the automobiles also controlled using some laws. The development of more environmental friendly vehicles such as the electric vehicles is an initiative taken by some countries for the reduction of GHGs. However, regulatory measures have their own limitations in preventing problems such as pollution and waste accumulation. It is necessary for all humans to make sure that none of their activities cause any problems to the environment. If the environmental problems continue in this manner, the earth will become unsustainable for future generations.

The 2004 Indian Ocean Tsunami is definitely a manmade disaster. Injudicious human activities can cause a lot of environmental problems such as global warming and pollution. Global warming can trigger climate changes and climate changes can cause disasters such as earthquakes and hurricanes that can contribute to the development of tsunami. In the absence of strong measures to prevent global warming problems, the earth will become unsustainable for living things in future. Therefore, it is the duty of every person to stay away from causing any type of harm to the environment.