The Role of Heterogeneous Catalysts in the Chemical Industry

Catalysis refers to the ability of an element or a compound to facilitate a reaction of several chemicals without being used in the same reactions. A catalyst is a material that facilitates catalysis. Catalysis is a kinetic process and not a thermodynamic one in that, the catalyst will increase the rate of the reaction but the equilibrium composition of the reactants and the products will not be affected (Das, Joshi, Sarang, & Rotliwala p. 2011 p. 2). Catalysts can occur in all three states – solids, liquids or gases – but most are used as solids or liquids. A catalytic reaction forms a cyclic process. This begins with the reactants creating complex structures with the catalyst which opens them up to a reaction to form the product(s). Once this is done, the catalyst is released and the process repeats (Deutschmann, Knozinger, Kochloefl, & Turek, 2009  p. 2). A catalyst works by providing an alternative path for reagents to react and form products. It works by lowering the activation energy which inevitably increases the rate of reaction.

Chemical products produced with the help of a catalyst comprise over 85% of all products. In industrialized countries, 15-20% of economic activities directly depend on catalysis (Heveling, 2012  p. 1532). Moreover, there are other catalysts that are used whose output has no economic value, for example, automotive exhaust catalysts and other catalysts used in the process of environmental abatement. According to Heveling (2012  p. 1532), catalysis is employed in diverse industries such as chemical manufacture, refining of coal, gas, and oil, the polymer industry and also has applications in environment conservation. Almost every reaction in the oil-refining plants is catalyzed.

There are different types of catalysts depending on the different phases of the reactants, products and the catalyst. Homogeneous catalysts are those whereby the catalyst and the reactants occur in a single physical phase. For example, the oxidation of toluene to benzoic acid which is catalyzed by Cobalt and Manganese benzoates is a homogeneous catalytic reaction (Chorkendorff, & Niemantsverdriet, 2007 p. 5). Heterogeneous Catalysts, on the other hand, are used in reaction systems in which the reactants and the catalysts form different physical phases. A solid catalyst can be used in a system of gaseous or solid reagents. For example, the use of pure iron in the Haber process for the manufacture of ammonia. In a heterogeneous catalytic reaction, a solid is typically used to catalyze a reaction involving liquids or gases. This is their major advantage over homogeneous catalysts since the catalyst can be separated from the reaction with relative ease (Chorkendorff, & Niemantsverdriet, 2007 p. 6). Biocatalysis is a form of catalysis where the catalysts are enzymes. It occurs in living things.

In figure 1, two reactants (A and B) bond on the surface of a catalyst. They then react to form a different product, P. P then separates from the surface of the catalyst through a process known as desorption. 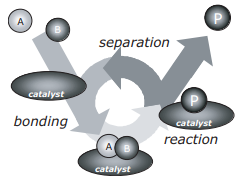 Figure 1: A catalytic reaction between A and B to form P

Differential equations are used to generalize the rate of reaction of catalyzed systems. However, this representation of the reaction does not capture the true nature of the reaction, which usually happens in elementary steps. Each of these steps has its own kinetics and can be adequately considered as a chemical reaction on its own having some degree of control over the overall rate of reaction of the system. The elementary steps of a heterogeneous catalysis reaction are very complex and very difficult to assign experimentally (Heveling, 2012 p. 1531). Therefore, the catalysts are, in practice, designed using empirical tools.

Very often, the heterogeneous catalysts used in the industry are high-cost transition metals and as such, there is a vested interest in reducing the quantities used in order to favor the economics. Catalytic reactions occur on the surface of the solid being used since solids are, in general, not permeable or porous. The number of atoms within the metal lattice is, however, much more than the number of molecules on the surface (Chorkendorff, & Niemantsverdriet, 2007 p. 7). Therefore, it is very costly to use solid metal catalysts in bulk. It has been observed that using Platinum (Pt) in nanometre-sized particles of about 2-3nm (used to catalyze the oxidation of CO into CO2) increases the efficiency of the reaction by about 92% and this inevitably reduces the cost (Davis & Davis, 2003 p. 140). Other catalysts such as palladium and rhodium can be used.

The first and necessary step in a heterogeneous catalytic reaction is whereby a molecule of a reactant is activated by being absorbed onto the surface of a catalyst. This occurs through a process known as chemisorption which is characterized by a change in enthalpy of about 80 kJ mol-1  (Davis & Davis, 2003 p. 141). A very strong chemical bond is formed between the reactant’s molecules and the catalyst’s surface molecules. As a consequence of the chemical bond is formed, chemisorption is specific to certain chemical combinations of reactant-catalyst. Chemisorption is limited to the number of active sites that are available to be occupied by the reactant. Once exhausted, chemisorption stops.

Considering the reaction catalytic oxidation of carbon (II) oxide into carbon (IV) oxide, the active sites on the catalyst (platinum) are denoted by “ * ”. Oxygen molecules and CO molecules are chemisorbed onto the surface of the platinum (Davis & Davis, 2003 p. 140). The oxygen molecules dissociate into two oxygen atoms as follows.

The chemisorbed oxygen atoms then react with the chemisorbed CO molecule to form carbon (IV) oxide. CO2 is very stable and it, therefore, dissociates itself almost instantaneously from the surface of the platinum (Chorkendorff, & Niemantsverdriet, 2007 p. 7).

The desorption of CO2 frees up the active sites of the platinum for more reaction cycles with other CO and O2 molecules. 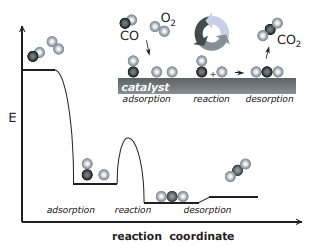 Figure 2: Reaction cycle and potential energy for the catalytic oxidation of CO to CO2

The most significant contribution of a catalyst is in breaking the bonds holding the molecules together. Hypothetically, if the temperature were raised high enough, the O-O bond can be broken to release two O radicals. CO would then react with an O atom to form CO2. The energy used to break this bond is about 500 kJ mol-1. In the catalyzed reaction, however, oxygen molecules dissociate easily into two O atoms on the surface of platinum easily without requiring any activation energy (Chorkendorff, & Niemantsverdriet, 2007 p. 9). Further, when carbon (IV) oxide is desorbed from the surface of the platinum, only about 15-30 kJ mol-1 of energy are spent depending on the catalyst used.

The preparation method, conditions underlying the preparation and the material quality of the raw materials greatly influence the characteristic properties of solid catalysts. Therefore, the mechanical and physical properties and conditions of each production step need to be controlled in order to ensure maximum quality (Deutschmann, et al., 2009 p. 44). To facilitate this, several advanced techniques such as Statistical Process Control, computer control of various production stems and subsequent automation. Quality assurance protocols are also integrated into each production step. To attain reproducibility of quality of product and process, several production companies all over the world produce solid catalysts in accordance with ISO standards (Farnetti, Monte, & Kaspar, 2010 p. 22). Catalysts used in industries can generally be classified into two categories which determine their method of production, namely supported and unsupported catalysts.

This type of catalysts is widely used in industrial processes. In previous decades, various preparation methods have been accepted and used to produce unsupported catalysts. One such method is known as mechanical treatment whereby catalytic active materials or the precursors of the same catalytic active materials are milled, mixed or kneaded with promoters, agents to stabilize their structure or pore-forming agents (Deutschmann, et al., 2009 p. 45). Catalysts prepared using n this method, however, have lower selectivity, activity or thermal stability compared to other methods. Another method of preparation of unsupported catalysts is known as Fusion whereby the components or precursors are fused with other agents resulting in the formation of an alloy. This method is very costly and requires a lot of energy (Deutschmann, et al., 2009, p. 45). The most commonly used method is known as precipitation.

Metal salts, for example, nitrates, solids, acetates, sulfates, and chlorides, form the bulk of the source materials for this method. Industries in practice prefer sulfates or nitrates. It involves forming concentrated solutions of different salts which are then crystallized after an ageing process (Deutschmann, et al., 2009 p. 46). The biggest setback of this method is that the precipitation stage results in the formation of a large amount of salt-containing solution. Other methods used are such as thermal decomposition, flame hydrolysis, and hydrothermal synthesis, among others.

Supported catalysts are those whereby the active substance forms a small part and is placed on the surface of a support. The support may participate in the catalytic reaction, for instance in catalytic systems such as alumina and aluminosilicates that are considered that are bi-functional. In other cases, the support may be inert including ceramics, porous glass or α-alumina (Farnetti, Monte, & Kaspar, 2010 p. 23). In modern industrial applications, synthetic supports are used which are tailored to specific physical properties. One method used in the production of supported catalysts is known as adsorption. In the method, the equilibrium of salt ions is adsorbed by particles or powders when exposed to metallic salt solutions. The method is used to achieve uniform deposition of the active material on a support. Since several supports have catalytic properties, their methods of production are similar to those of unsupported catalysts (Deutschmann, et al., 2009 p. 48). Other methods include ion exchange, and the active material being precipitated into the support.