What I am trying to accomplish is the project on Solid Waste and Recycling in Schools. The goal therefore is to reduce the toxicity of the waste materials in schools.

The target audience is the learners in the schools, the teachers and the subordinate staffs in the institutions of learning.  The rationale for choosing the audience is that these are the members who engage actively in throwing away the waste products and are the ones who will be involved in the recycling process to safe the resources and make the environment sustainable.

Step 1: Selecting a behavior to be promoted

The targeted behavior: increasing the recycling on schools in the common areas, dorms and classrooms.

The target audience is the learners in the schools, the teachers and the subordinate staffs in the institutions of learning.

Step 2: the Identification of Barriers and Benefits

Waste characterization and the observation process

An on-line questionnaire dispersed to learners

The questionnaire outcome: poor signage and lack of the convenience was a major barrier.

Step 3; developing an effective strategy   that will help in changing the behavior

Increasing the recycling bins and improving the allocation sections

Do a piloting on a visually appealing, the bilingual kind of a recycling bin

Do piloting of a new bilingual posters and signage that are easy to understand and are culturally sensitive.

Expanding the outreach at the students and the staff orientation

The student workers should be in charge to collect the recyclables

Step 4; To Pilot the strategy

The results indicated that there was an overall 41 percent reduction following the amount of the recyclables that were present in the school’s trash after the period of two months.

Stalwartly agreed that it was easy to recycle

The always or usually recycle the waste 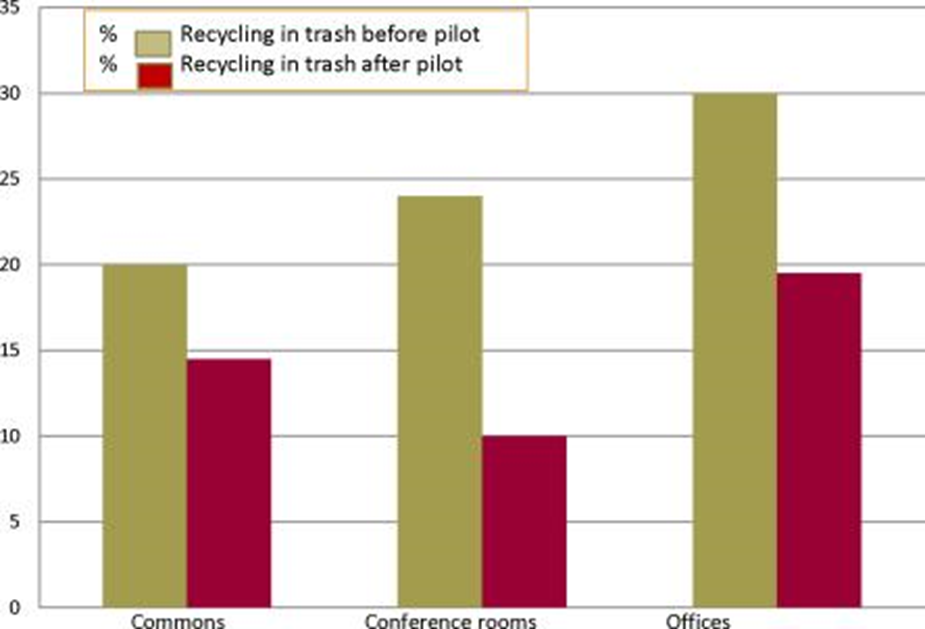 The strategies that I selected to incorporate in the program are the convenience and communication to the learners. Here, I will provide the recycling receptacles in the more convenient areas and the garbage receptacles in the less convenient sections.  I will seek the recommendations from my target audience to identify the best areas for the receptacles (Lefebvre, 2013). Secondly, I will institute a user charge for the garbage disposal and place no charge for the recycling (Haldeman & Turner, 2009). I will communicate on the amount of money an individual will lose in an average through throwing away the recyclables into the wastes, instead of the amount of money an individual will save through the recycling process.