The Headless Vikings of Dorset were discovered recently in 2009 at the seaside town of Weymouth. The 1000-year old mass grave had 51 skulls neatly stacked on the side, and 54 decapitated skeletons of young men dumped in the abandoned Roman quarry (see Appendix A and B). The shocking discovery was made while excavating for the controversial Weymouth relief road. Carbon-dating results indicated that the slain men lived between AD 900 and 1030 (Reese). This was a period marked by the violent entanglements between the Anglo-Saxons and the Viking invaders (Owen). The slain bodies in the grave were mainly of men in their late teens to mid-20’s. The composition of the decapitated bodies revealed that the ‘worriers’ came from across many Scandinavian nations. One of the examined bodies was of a boy originating from the north of the Arctic Circle. The technique used to identify the bodies involved the testing of isotopes that act as chemical markers that help disclose the geographic origin of the individual. These isotopes, for instance, Oxygen isotopes, vary as per the location or climate and become entangled within the molecular make-up of the teeth (Budd et al. 127). What’s more, is the isotopes discovered from the Viking bodies indicates that they came from diverse backgrounds contrary to the expectation that Saxon enemies attacked predominantly from a single ethnic group. The other bodies mostly come from Sweden and Norway.

The Dorset discovery is particularly fascinating considering that the Vikings are the ones who are infamous for ransacking and pillaging but in the light of the mass grave discovery, it is evident that it was the other way around as the Anglo-Saxons seemingly acted more barbarically. Lovgren, in an article by the National Geographic, noted that the bad reputation attached to the Vikings was as a result of the many writings by religious scholars. The history of the Vikings is from the perspective of the French and British clergy and as a consequence the brutality of the ‘Viking hoard’ precedes them. However, some archaeologists note that the barbarity of the Anglo-Saxons was at par with that of the Vikings (Owen). Moreover, warriors from both sides utilized the same gear during warfare: spears acted as the primary weapon and axes and swords served as secondary weapons. Nonetheless, the Vikings had more numbers during battle and had a surprise or two up their sleeves (Loe and Boyle 23).

The discovered skeletons of the Vikings had deep cuts in the neck, jaw, and skull. The observations postulate that the Vikings were mostly captives and their end came after the savage hacking off of their heads. Most of the victims had multiple puncture wounds in their skeletons. The piling of the heads of the slain Vikings can be compared to the headless man found in a tomb (see Appendix C) engraved with torture murals of the Mayan civilization (Roach), and perhaps acted as a display of victory. The application of such a ritual further challenges the notion that the Vikings were the most barbaric during the medieval times. The execution site also had no trace of clothing. It clearly indicates that the men were mutilated and buried naked. Additionally, the Anglo-Saxons from the medieval times had a tendency of executing their enemies at hilltops. This is reiterated by the discovery of the mutilated Vikings at the prominent Weymouth hilltop (Loe and Boyle 98).

Significance of the Finding to History

Close to the Dorset mass grave, there was another discovered grave site with about 34 mutilated bodies which too were of Scandinavian origin (Keys). The discovery of the two mass graves, particularly the Dorset grave, may help historians determine the questions that have long vexed them. The first discovered grave was linked to the St. Brice’s day massacre and many chroniclers hold that the Danish people were targeted for execution. Scandinavians were certainly a hated lot, and many writers described them as the most hated creatures, a filthy pestilence, vile and barbaric (Keys). However, this Dorset discovery advances that the execution of the ‘Viking hoard’ was more of a police action against individuals who were classified as a military threat to the state of England rather than a ‘mass extinction event’. With the discovery of the graves, their locations are tied to where most rebellious mercenaries would have been sited. The graves are close to a medieval town or what was known as a royal administrative center. To support this supposition, no other mass graves have yet been found in other regions, such as the Danelaw, which had a more prominent population of Scandinavian settlers (Keys). Hence, it is safe to surmise that the mass grave was a military strategy by the Saxons to deter other Vikings from attacking the government of King Aethelred the ill-advised.

Additionally, an Oxford archaeologist by the name of David Sore, who led the excavation for the site, supported the idea that the grave site was not a normal occurrence of criminal justice. First, David noted that the mass grave was located close to a parish boundary and a prominent road. The Saxons found such locations as the most suitable for executions. Although executions were a common occurrence during those times, the sheer number of casualties and the method applied to extinguish the Vikings goes beyond the typical criminal justice in practice during the medieval times (Loe and Boyle 1-300). In fact, Dave concluded that the gravesite was as a consequence of a massacre, something not seen or before discovered in Britain’s long history, particularly one from that period. The missing skulls from the gravesite indicated that maybe they belonged to leaders of the marauding Viking gang. The murderous Saxons may have kept them aside as trophies—which highlights the naivety of believing that Saxons were peaceful farmers. In actuality, this was a commonality in Saxon’s victory parades as was evidenced by the Battle of Maserfield in AD 642. However, evidence from the grave site does not indicate any battle wounds on the skeletons; hence, the slain men were captives. Ergo, the Saxon brutality can be compared to that of the Vikings, that is, if the chronicles by the church clergy still have merit (Winroth 1-320).

The 2009 mass grave discovery at Dorset has rewritten Britain’s history and has introduced an extraordinary story of violence from the medieval period not before seen or investigated. The finding is still fresh and much is still unknown about the men in the grave: from where they come from, how they found themselves in Dorset, and if indeed they were terrorizing the residents of the Kingdom of England. However, what is known is that the Scandinavian men of young age were brutally executed and decapitated. The location of the mass grave indicates that they were regarded as enemies; but, the number of those decapitated bodies highlights a gory history of the Saxon medieval time yet to be uncovered. The archaeological finding has reshaped the way people view the wartime between the Vikings and the Anglo-Saxons and has brought to the fore the brutality exhibited by the Saxons. 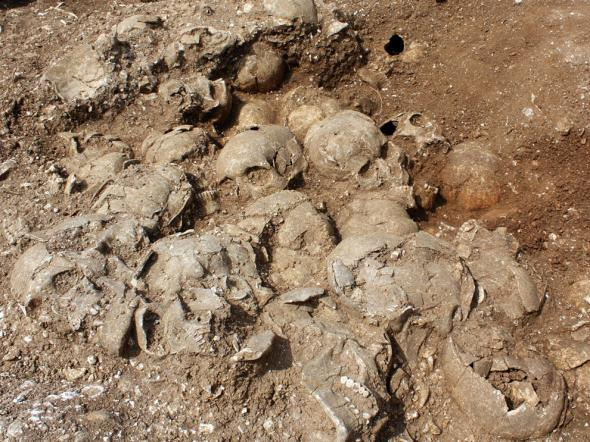 Appendix B: Remains of the Decapitated Vikings with TV historian Dan Snow Looking on 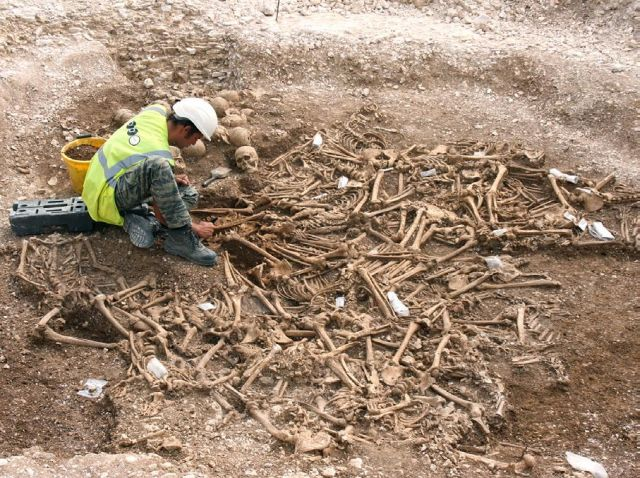 Appendix C: A Skeleton found together with a vase beneath Mayan Site of Bonampak, Temple of Murals in Mexico 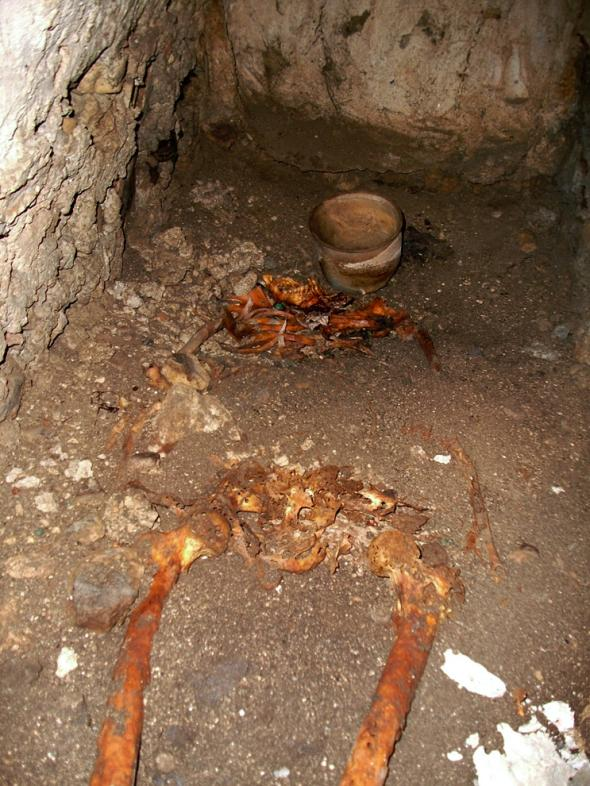